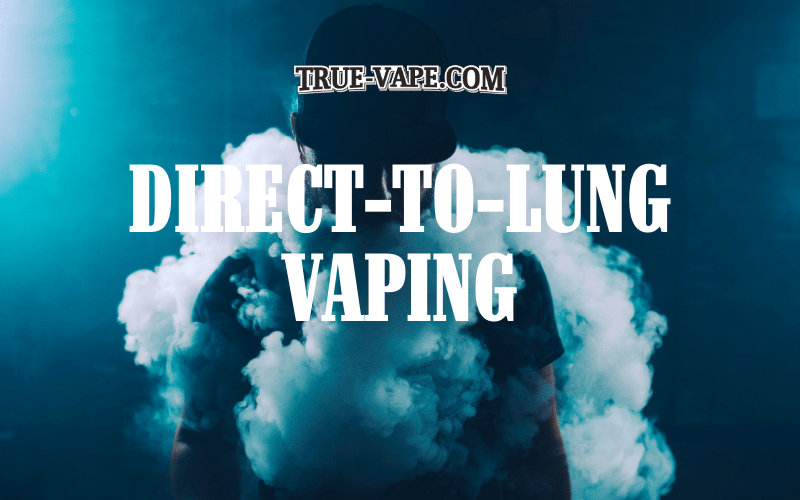 We gave you an in-depth guide to mouth-to-lung vaping in our last blog so you know what? Being the good guys we are here at True Vape, we’ve decided to follow it up with a comparison blog on direct-to-lung vaping – the second of the two main vaping techniques. We know, we do spoil you don’t we?

What is direct-to-lung vaping?

Direct-to-lung vaping is usually associated with sub ohm vaping. This is when the vapour is inhaled directly into the lungs and then exhaled. These dedicated vaping devices often need a greater airflow to provide a cooling function for the vape, therefore they are designed to allow more air over the coil.

You know when you’re walking down the street and you see someone exhale a mammoth cloud of vapour? They’re likely direct-to-lung vaping. Just be careful if you’re a newbie though, users are renowned for having a coughing fit when they try direct-to-lung vaping for the first time! A bit of practice may well be needed.

How does it compare to mouth-to-lung vaping?

Mouth-to-lung is exactly how you would smoke a cigarette – drawing the smoke into the mouth then taking a secondary inhale to transport it into the lungs.

What are the benefits of direct-to-lung vaping?

Yeah, we know we raved about mouth-to-lung vaping in our last blog but let’s be fair, direct-to-lung vaping is pretty awesome too! Users can exhale those rather impressive columns of vapour into the air and receive a much gentler throat hit than those that use mouth-to-lung.

Furthermore, you don’t completely sacrifice flavour by inhaling directly to the lungs rather than holding in the mouth first. This is because you’re taking in a much larger amount of vapour, ensuring a higher concentration of flavour in one place. Plus, producers are now creating recipes dedicated to direct-to-lung vaping, maximising your flavour enjoyment.

Many users feel direct-to-lung vaping offers a more intense experience, whilst from a technical point of view, it is well suited to modern vape tanks and a wide variety of e-liquids.

How do you direct-to-lung vape?

As we said before, first-time users of direct-to-lung vaping may well end up in a coughing fit. Stick with it though and you’ll reap the benefits. They don’t say practice makes perfect for nothing! Simply take a large inhale directly from your vaping device, drawing the vapour directly into your lungs in the same breath. From a technical perspective, it tends to be better when your vape has an open airflow and high-power wattage settings.

What are the best e-liquids for direct-to-lung vaping?

This is where the best e-liquids are in direct contrast to those most suitable for mouth-to-lung vaping. In this case, e-liquids with a higher Vegetable Glycerin (VG) ratio are the ones you want to get. They offer a gentler vaping experience with increased vapour that does not hurt the throat; even if you are exhaling enough to look like you’re coming on-stage on Stars in their Eyes! Ratio-wise, it tends to be 70:30 VG/PG but some manufacturers go up to 80:20.

One thing to bear in mind is that direct-to-lung devices are typically more powerful than mouth-to-lung vapes; therefore requiring a lower strength of nicotine. If you’re planning on moving from mouth-to-lung to direct-to-lung, you’ll definitely want to take this into consideration. Clearly, you’ll be inhaling an awful lot more vapour, so nicotine levels will need to be reduced in response. How? Well, say you’re using a 2.4% e-liquid (the equivalent to a mid-to-heavy smoker seeking a higher nicotine level). You’re probably going to be taking in four times as much vapour, so you’ll want to reduce nicotine levels to 0.6%.

So there you go, the second of the two main vaping techniques. Always wanted to know how vapers produced those impressive plumes of vapour? Now you do, so get practicing!

Check out our store today for an array of products for all your vaping needs; if you have any questions, don’t hesitate to get in touch! One of our experts will be on-hand to provide help.