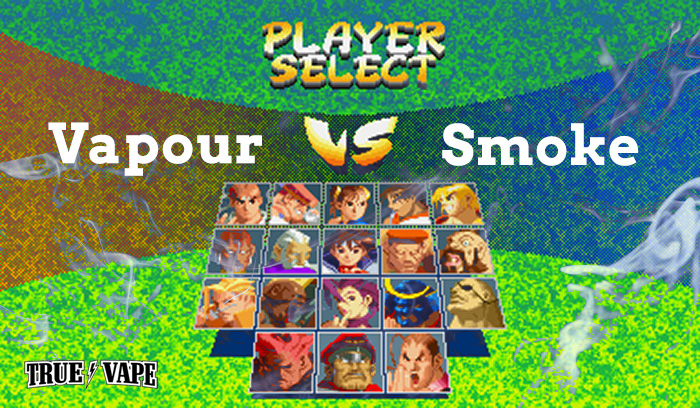 If you are thinking of making the transition from cigarette smoking to vaping then we highly recommend looking at some of our Starter Vape Kits. These kits are designed to help smokers ditch the fags and move towards vaping e-liquid as an alternative.

But before you get that far you may be asking yourself what exactly is vapour?  And how does it actually differ from cigarette smoke?

Smoke is essentially a collection of tiny airborne particles and gases that are produced when something is burnt. When you burn something at high temperatures, its chemical composition is altered and as a result, a vast number of combustion by-products are produced, which in turn are harmful to inhale.

Vapour, by contrast, hasn’t undergone a chemical change like smoke. It could even be condensed back into a liquid by adding pressure. When vapour does not carry the same harmful bi-products that smoke carries.

Now we will take a closer look at the differences between the cigarette smoke and e-liquid vapour:

Although they share some visual similarities, smoke and vapour behave very differently when exhaled into the air. Vapour is very quick to disperse, whilst smoke clouds can linger for quite some time in the air due to having a denser composition.  There is also no visual residue produced from vaping, unlike cigarette smoking, which can cause the yellowing of clothes, body parts, walls and furniture due to the tar content.

The smell of cigarette smoke can linger in a room for a very long time – days, weeks, or even months. Vapour clouds, on the other hand, have a smell that dissipates much quicker.  It is often said that vapour is much nicer smelling than cigarette smoke due to the many different flavours and varieties on offer.

It is well known that cigarette smoke contains thousands of unhealthy chemicals, dozens of which are known to cause cancer. Vapour, on the other hand, contains a handful of ingredients including nicotine, vegetable glycerin, propylene glycol, and food-grade flavours. It is still unknown whether there are any long term negative effects of vaping, and research continues, however it is widely reported that vaping is much less harmful than smoking cigarettes.

Hopefully, we have cleared up the differences between smoke and vapour and you are now ready to begin your vaping journey!